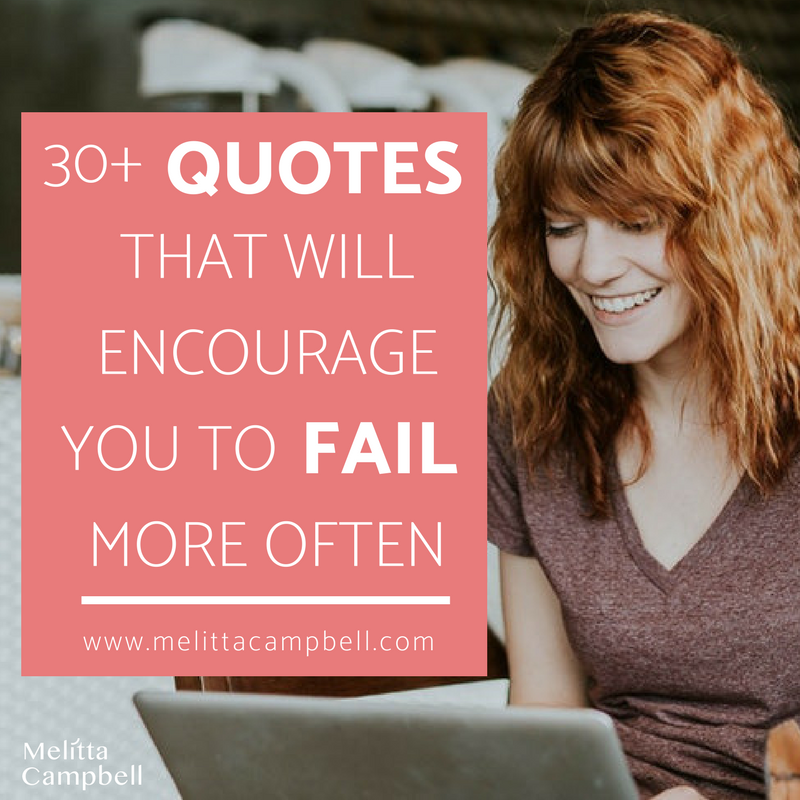 30+ Quotes That Will Encourage You to Fail More Often

30+ Quotes That Will Encourage You to Fail More Often

I see the fear of failure hold so many women back from achieving the success they want and deserve in their home business.

...sometimes it even prevents them from starting in the first place!

I was at an event over the weekend full of people wanting a change. It was eye-opening. Most of them cited that they were afraid to start something new or to change as they feared what others might think of them if they did.

Am I the only one who thinks it's crazy to limit your future and stay miserable, in case someone else doesn't like it?

I'd like to share some wise words from Martha Graham: "What people in the world think of you is none of your business." How true is that?! If you think about it, what people think about what you are doing or not doing is their problem, not yours. You certainly shouldn't stay stuck where you are and do nothing for fear of it!

On that point, here's another great quote. It's some advice a colleague of mine, Kim Madsen, once shared: "Never take advice from someone who doesn't already drive your dream car!"

In reality, most people don't think of you at all. They are too wrapped up worrying about what other people might think of them! If they do have a thought about what you are doing, it's most likely to be fleeting.

So, now you're not worried about what others think - it's time to get out there, make a difference and set the world alight!

To do that successfully, you're going to have to fail a few times first so you can learn how to really get things done and have an impact.

To help you, here are some of my favourite quotes that will encourage you to fail more often.

“I never lose. I either win or I learn.” Nelson Mandela

“You may encounter many defeats, but you must not be defeated.” Maya Angelou

“Catch on fire if you must, sometimes everything needs to burn to the group to that we may grow.” A. J. Lawless

“Success is the ability to go from one failure to another with no loss of enthusiasm.” Winston Churchill

"If at first you don't succeed...you're normal." Michael Hyatt

“There is freedom waiting for you, on the breezes of the sky, and you ask "What if I fall?" Oh but my darling, what if you fly?” Erin Hanson

“It never gets easier, you just keep getting better.” Unknown

“I am still learning.” MichelAngelo

“It’s failure that gives you the proper perspective on success.” Elle Degeneres

“A secret to happiness is letting every situation be what it is, instead of what you think it should be, and then making the most of it.” Unknown

“You never know how strong you are, until being strong is your only choice.” Bob Marley

“I can accept failure, everyone fails. But I can’t accept not trying.” Michael Jordan

"Failure is tough. But it's better than never having tried in the first place." Unknown

“There is nothing either good or bad, except thinking makes it so.” William Shakespeare

“Don’t give up, don’t take anything personally, and don’t take no for an answer.” Sophia Amoruso

“You learn more in failure that you ever do in success.” Jay-Z

“If you are not prepared to be wrong, you will never come up with something original.” Ken Robinson

[easy-tweet tweet="“If you are not prepared to be wrong, you will never come up with something original.” Ken Robinson" user="@MelittaCampbell" hashtags="#failure, #success, #HomeBiz, #quotes

“Failure is not falling down, it’s refusing to get up.” Chinese Proverb

“I’ve probably earned the right to screw up a few times. I don’t want the fear of failure to stop me from doing what I really care about.” Emma Watson

"The path to success is paved with failures." Melitta Campbell

“Failure is only the opportunity to begin again – only this time more wisely.” Henry Ford

“Think like a queen. A queen is not afraid of to fail. Failure is another stepping stone to greatness.” Oprah Winfrey

“Anyone who has never made a mistake has never tried anything new.” Albert Einstein.

“Women, like men, should try to do the impossible. And when they fail, their failure should be a challenge to others.” Amelia Earhart

“With everything that has happened to you, you can either feel sorry for yourself or treat what has happened as a gift. Everything is either an opportunity to grow or an obstacle to keep you from growth. You get to choose.” Dr. Wayne Dyer

“Failure is not the opposite to success, it’s part of success.”

"What would you attempt if you knew you could not fail?" Unknown

“Don’t worry about failures, worry about the chances you miss when you don’t even try.” Jack Canfield

[easy-tweet tweet="Don’t worry about failures, worry about the chances you miss when you don’t even try. - Jack Canfield" user="@MelittaCampbell" hashtags="#failure, #success, #HomeBiz, #Quotes

“Just because you fail once, doesn’t mean you’re going to fail at everything. Keep trying, hold on, and always, always, always believe in yourself, because if you don’t then who will sweetie?!” Marilyn Monroe

“Failure is unimportant. It takes courage to make a fool of yourself.” Charlie Chaplin

“Failure is part of the process of success. Those who avoid failure, also avoid success.” Robert Kiyosaki

“There is no such thing as failure, there are only results.” Tony Robbins

[easy-tweet tweet="There is no such thing as failure, there are only results. - Tony Robbins" user="@MelittaCampbell" hashtags="#Failure, #Success, #Quotes, #Inspiration

“Some failure in life is inevitable. It is impossible to live without failing at something, unless you live so cautiously that you might as well not have lived at all – in which case, you fail by default." J.K. Rowling

"Failure is not the opposite to success - in fact, it's often the fastest route to it." Melitta Campbell

“Failure is the tuition you pay for success.” Walter Brunell

What has inspired you lately?

Share your failures, lessons, inspiration and favourite quotes in the comments below, I'd love to hear them!

Get more support, inspiration and tools to help you grow your business

All for one low price and no contract!

You May Also Enjoy…

Why Women Stay Stuck with a Hobby, Not a Real Business

You Are Not Your Mistakes

How to Overcome Self-Doubt

6 Videos that will Restore Your Positivity Today

31 Quotes to Inspire Your Networking Success

If you feel shy, awkward or out of place when networking, these quotes will help you feel inspired to try again - knowing that everyone can network with ease and confidence, once they know these secrets!

How to Plan Your Business for Success in 2023

No matter where you are in your business, you need a clear plan for turning your dreams into reality. Here's how you can set yourself up for greater success in 2023 with clear goals and a winning plan!

Want to WOW your clients at 'Hello' and give them an experience that will have them coming back for more - and bringing their friends? The secret lies in having a Client Journey Map...

The Planisodes: Set Your Business Up for Success in 2023 (the easy way)

Ready to make this year your best yet?! Join us every day this week when the 'Planisodes' will guide you in creating strong goals and plans for your business - that you can actually stick to!

Don't miss this episode as Genc shares his journey and discusses how to create the ideal website that will promote engagement and ultimately result in conversion.

In this episode, I answer your biggest questions when it comes to creating a website that works.

Feeling lost, confused or overwhelmed
when it comes to growing your service business?

Take the quiz to determine your next best steps (It takes only 3-minutes).